I travel frequently. When I do, the Saint, (the most accurate description I can think of for my loving, long enduring wife) takes care of the farm. Invariably, about every third trip, something will go amiss at the home place while I am gallivanting around the world. Recently I came home to find; a pair of hoof trimmers, three buckets, a hammer and other assorted tools laying in the field, and a cut up electric fence with the wrong animals in the wrong fields. While these might seem like random signs of an un-kept farm, they are all part of the story of the great farm rebellion.

The story begins with my wife calling me at my hotel in Japan. Her opening statement was, “I’m ready for ‘the pig’ to be turned into bacon!” She does not normally relish the thought of eating our farm animals and in fact, is the reason we can only have “dairy” goats. The story begins with her arrival home from work and going out to feed the animals. Immediately she sensed that something was wrong. A bleating sound told her one of the sheep was in trouble. Well, actually, not a sheep, but a 260-pound ram had gotten his horns tangled so tightly in the electric fence that he was penned to the ground. Immediately she got to work with the only tool she could find quickly, a pair of semi sharp hoof trimmers. Imagine, a petite blonde little Texas girl working furiously disregarding her own safety as the 260-pound ram looks on thankfully. As she snips the ram free – she hears a ruckus by the chicken house, only to see that her chicken is scared and bleeding and the dogs are chasing all the chickens around the yard.

After securing the hen in a safe, place and locking up the dogs she notices that therebellious goats (yes the same ones I am in a losing battle with – see my blog on being locked in the feed shed by the goats), have decided to invade the chicken pen – gleefully eating the chickens food which I have been told has a similar attraction to goats as ‘crack’ has to humans! The ram by her side (he has now decided that he and her are besties), she runs the goats out of the chicken run, only to open the hen house door to her billy goat standing there with straw hanging out of his mouth and every bucket and feed dish flipped over! At this point one of the buckets came into play as a means of motivating the goat to leave the hen house in a rapid manner to avoid said flying bucket.

With the hen house gate back in place, goats ejected from the hen house, and her new bestie at her side, she is exhausted and ready to go back to the house. But it’s not to be. She hears a commotion – turns around – only to see the pig (Charlotte) trotting back into the hen yard carrying one hen yard gate on her snout and once again allowing all the animals back in the chicken yard. Now, when Charlotte came to use, she was a cute, 30-pound pig. However, Charlotte, has taken full advantage of the ample grain and grass to now become a 200-pound bundle of sheer determination to get at any source of food – especially chicken food. A mighty battle ensues between my wife and Charlotte (who by the way likes to bite her heels and calves). The shovel and other assorted implements come into play, before she finally manages to eject Charlotte and the goats (again) from the hen house and secure the gate once more.

This is about the time that I get the call stating that she is ready for “’the pig’ to be turned into bacon”. As a side note, she never again referred to Charlotte by her name, she now was simply “the pig”. And I really can’t do the way my wife said this justice. She has a wonderful Texas drawl that I love and which gets noticeably more pronounced under stress.

I wish I could say there is a moral to this story, but there really isn’t. Other than I have a Saint for a wife, I amazed at her tenacity and resourcefulness, and I think I’m going to go have a bacon sandwich! 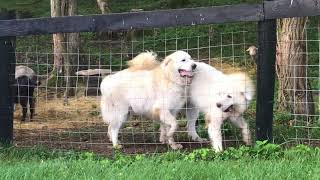